BRAZILIAN CINEMA TODAY: Essays by Critics and Experts from Across Brazil (2015) 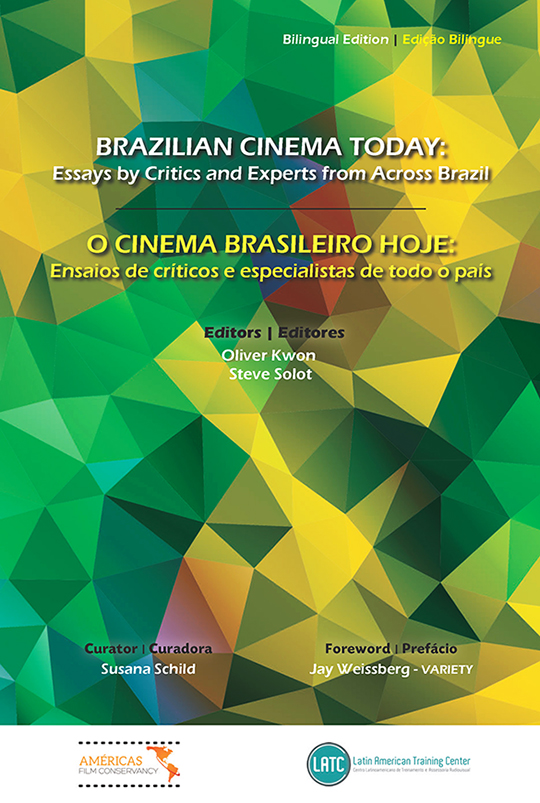 A unique collection of articles by leading film critics, spanning Brazil from Rio Grande do Sul to the northern state of Pernambuco, this volume offers a panorama of current trends and the evolving Brazilian film industry. The compilation is not only a reference tool for the study and debate of Brazilian Cinema, but also serves as a sounding board for some of the country’s most representative film critics on themes of critical importance to their respective cities and regions. The work is published in an English-Portuguese bilingual format, in an effort to offer the widest possible access to readers around the world.

The Americas Film Conservancy-AFC and the Latin American Training Center-LATC have joined forces to present a diverse and refreshing view of Brazilian audiovisual vitality, and astute perspectives on the past, present and future directions of the Brazilian film industry. Beyond a vehicle to promote Brazilian cinema worldwide, this publication represents the aim of AFC and LATC to support freedom of expression in film and film criticism, and to promote public awareness that film is an important art form as well as a form of entertainment.

“The collection of essays here, edited by Susana Schild, testifies to the vitality and heterogeneity of Brazilian cinema. Those of us who’ve been following the scene for some time know that putting Brazilian film into a restrictive box is a ridiculous exercise, but reading these essays should make all of us outside the country aware of how limited our access has been to much of the country’s cinematic riches”.
Jay Weisberg, Variety Film Critic

Part I: The Beginning of Brazilian Cinema in the 21st Century

Films and TV: Scenes from a Long-Term Relationship
Nelson Hoineff – Critic, documentarist and founder of Film and TV organizations in Rio de Janeiro

The Northeast Is Green
Maria do Rosário Caetano – Journalist, critic and film researcher

The Cinema of Bahia: Reality, Memory and Dreams
Orlando Senna – Filmmaker, writer, journalist and one of the founders of EICTV Cuba (International Film and TV School)