This year, the Brazilian Film Festival of Miami, the most traditional and longest-running Brazilian film festival outside of Brazil, will be September 14-23.  Steve Solot, LATC President, will participante in the Workshop, “How to Access the Dynamic Brazilian Film and Television Market” which will also include the two producers, Elisa Tolomelli and Renata Almeida Magalhães.

The workshop will take place at 4:00pm on Septembeer 22nd at FilmGate (Downtown Media Center, 168 SE 1st Street, Miami) and is aimed at film and television producers, executives, attorneys, investors and others interested in a panorama of the current multiple opportunities in the Brazilian audiovisual industry, as well as how to access government funds and partner with local players.

The curators this year are: Anna Marie de la Fuente, Editor-in-chief for Latin America of Variety, Flavia Guerra, journalist and documentarhy producer and Carlos Gutierrez, Diretor of Cinema Tropical, a film distributor based in New York.

This edition’s tribute honors Cacá Diegues, one of the most important Brazilian directors, and a special screenings of his films will  include Orfeu, Deus é Brasileiro and O Maior Amor do Mundo. His classic film, Bye Bye Brasil, will be the closing film of the festival.

For more information on the festival visit 22nd Brazilian Film Festival of Miami. 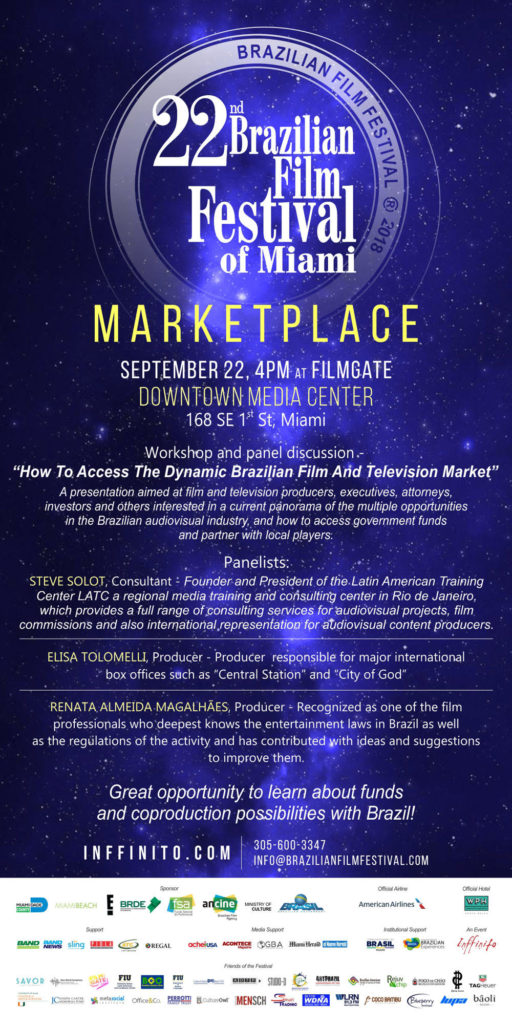