, organized by the Brazilian Association of Intellectual Property (ABPI), held on May 29th in the offices of Dannemann, Siemsen, Bigler & Ipanema Moreira, in Rio de Janeiro and São Paulo, via videoconference.

The roundtable discussed the new challenges of the audiovisual industry in the current scenario of digital media. One of the points concerned was the new law 12,485/2011, which regulates the pay-TV market, creating a strong demand for national content. In addition, another topic of discussion was how to deal with the problem of piracy in digital media. The event was attended by, as speakers, Carla Affonso, Vice President of Operations for Zodiak (SP), Rodrigo Letier, Executive Producer of TvZERO and Steve Solot, President of the Latin American Training Center-LATC. The roundtable also had the presence of Fabio Barboza, Veirano & Advogados Associados S/C, as moderator, and Attilio José Ventura Gorini, Dannemann, Siemsen, Bigler & Ipanema Moreira, as Discussant. 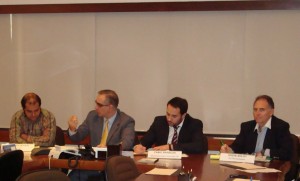