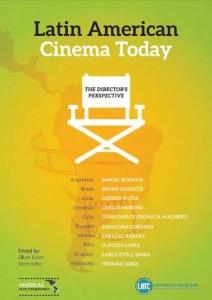 The English-Spanish version of the book is available on Amazon. To purchase it now, click here.

The book was edited by Oliver Kwon, President of AFC, and by Steve Solot, President of LATC, and is the first joint effort of the two organizations to develop initiatives for the advancement of national film industries and filmmakers in Latin America. The publication is consistent with AFC’s mission to promote the development, preservation and globalization of Latin American films as a cultural and historical resource, and to bring greater mutual understanding between Latin America and the US.

Latin American Cinema Today: The Director’s Perspective has two principal objectives. First to offer a current panorama of the directions of Latin American cinema from the perspective of the film director, thus providing a reference tool for study and debate on the region’s cinema for students, filmmakers and the general public. The second objective is to serve as a sounding board for some of the most prominent and representative filmmakers in the region on themes of critical importance to their respective countries. It is for that reason that the book is published in a bilingual format, in an effort to offer the widest possible access to readers around the world.