On the occasion of the 6th Edition of the Miami Media and Film Market, The Latin American Training Center-LATC announced the winners of the 2016 Latin America-US Screenplay Treatment Competition: “Más cerca”, by Horizoe Garcia Miranda, from Cuba, and “The Alien Hunter”, by David Teles, from the United States.

The winning Latin American treatment is a documentary that portrays the everyday life of a Havana park where the first Wi-Fi system was installed allowing Cubans to access the internet. Through their video calls to their relatives abroad, we get closer to the lives of different people in the community. The winning treatment from the U.S., “The Alien Hunter”, is a feature film which tells the story of Skyler, a 10 year old girl who finds herself lost in the desert after sneaking along on an alien hunt with her father. There she meets a boy her same age, Memo, and together they embark on a journey home in which they discover the true significance of being human.

Focused on cross-border themes, the 2016 Latin America-US Screenplay Treatment Competition aims to encourage co-productions of feature films (fiction or documentaries) between Latin America and the US, to promote location shooting in two or more countries, as well as to help new writers find success in today’s highly competitive film and entertainment industries.

The treatments were judged by a Selection Committee composed of professionals from the supporting organizations, namely: Agustin Gonzalez, from the Miami-Dade College, Rafael Lima, from the School of Communication of the University of Miami, José Andres Castillo, from the Miami International Film Festival, Ben Lopez, from NALIP, and Kate Lyra and Tiago Elídio, from LATC.

The first-place winning screenplay treatment from each region receives a U$500 cash award from LATC, toward development of the screenplays, and a Certificate for digital download of Final Draft 9 screenwriting software. In addition, the three finalists from US and the three finalists from Latin America will receive a copy of the LATC publication “Latin American Cinema Today: The Director’s Perspective”. The winning treatments will also be made available by LATC to independent production companies in the US and Latin America, through its agreements with production organizations and others, for possible acquisition, development and/or production.

The 2016 Latin America-US Screenplay Treatment Competition was open to filmmakers and screenwriters, over 18 years of age, with a university degree in any field, citizens or residents of either the US or a Hispanic Latin American country, without any feature film produced to date. It was organized by the Latin American Training Center, with support by the following entities: 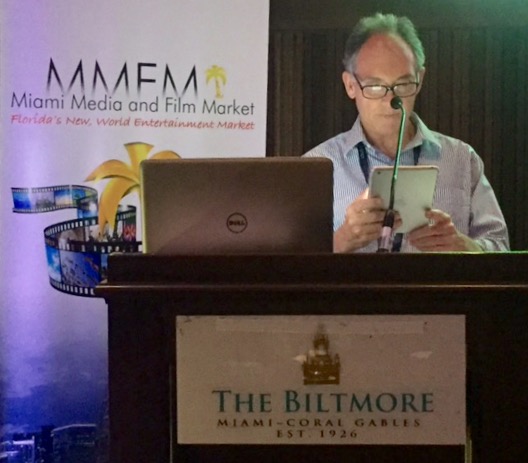 Steve Solot, President-LATC, during the Announcement.