Fiscal Incentives for Audiovisual Production and Co-Production in Iberoamerica, Canada and the U.S. (2009) 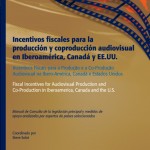 BOOK: “Fiscal Incentives for Audiovisual Production and Co-Production in Iberoamerica, Canada and the U.S.”

SPECIALISTS ANALYZE TAX INCENTIVE LEGISLATION IN THE US, ARGENTINA, SPAIN, CANADA, BRAZIL AND OTHER COUNTRIES

Sources for film financing and government subsidies are the subject of the book, “Fiscal Incentives for Audiovisual Production and Co-Production in Iberoamerica, Canada and the U.S.”

Written by specialists from 11 countries, with a prologue by the President of the Brazilian National Film Agency (Ancine), Manoel Rangel, the publication was launched in Rio de Janeiro on March 26, 2009 in the Argumento Bookstore in Leblon, Rio de Janeiro.

An initiative of LATC (Latin American Training Center), in conjunction with the Spanish group, Entidad de Gestión de Derechos de los Productores Audiovisuales (EGEDA), the publication is designed to meet the needs of all those involved in the audiovisual production sector, including investors and lawyers, as well as university students.

Each chapter, in the original language of the author, offers a description of the fiscal incentive and financial mechanisms for production and co-production of audiovisual content in the respective country, as well as rules applicable to foreign investors.

“The book serves as a unique consultative resource for professionals in the audiovisual market, and is aimed at promoting the expansion of national audiovisual content industries, as well as the collaborative nature of film production in today’s globalized audiovisual environment,” explained Steve, Solot, LATC President and Coordinator of the publication. “We can only have strong local production if the market is professional.  One of LATC’s objectives is to encourage this process by means of consulting, training seminars and publications.”

Countries represented in the publication are Argentina, Brasil, Canada, Chile, Colombia, Spain, Mexico, Porto Rico, Portugal, U.S., and Venezuela. A special chapter is devoted to the IBERMEDIA Program, which provides specific funds for film and television co-production among Iberoamerican countries.

“The scope of this work, a panorama of audiovisual public policy in selected countries, is based on a need and a challenge.  In meeting that need, the publication finds fertile ground in its impact on the decisions and planning of audiovisual firms, as well as in the strategy design by government officials.  In meeting the challenge, it promotes a positive scenario of exchange among economic agents beyond their national borders,” wrote Manoel Rangel, Ancine President, in his prologue.

Written by specialists from 11 countries, with a prologue by the President of the Brazilian National Film Agency (Ancine), Manoel Rangel, the publication was launched in Rio de Janeiro on March 26th at the Argumento Bookstore in Leblon.

The book is no longer available. A new updated version of this publication is available for free download here.