The 2019 LATC Global Film & TV Program in Los Angeles was a Huge Success!

The 11th edition of the LATC Global Film & TV Program was once again a huge success, with participants from all over the world: Brazil, Chile, Colombia, Malaysia, China, Japan, Indonesia, Thailand, Lebanon, Mexico, Australia and Vietnam.

This year, consistent with its diversity/inclusion policy, LATC offered, in partnership with Spcine (São Paulo municipal audiovisual agency), scholarships for two Black Brazilian Filmmakers. During the intensive program in Los Angeles, the LATC delegation had multiple opportunities to network, present projects and discuss their creative and commercial aspects with high-profile Hollywood executives and industry organizations, such as the Pitch Panel, one of the highlights.

Aimed at connecting professionals with current industry trends, this updated edition of the Program allowed each participant to customize segments of the scheduled activities in Los Angeles according to their specific interests as well as select their type of AFM access badge, register for optional training activities and tours, and determine the profile of industry professionals for their meetings.

“Being a part of the LATC program was one of the best experiences of my professional life. I learned so much and I met the most amazing people. The program is both, fun and dynamic, but also educational and serious. It was great to meet people from all around the world and all areas of the industry; having so much cultural and professional diversity made the experience very enriching. Thank you LATC for making this possible and for giving us the opportunity to grow!” said Lorena Ruíz, from Mexico.

“To have the ability to listen to and ask questions with some of top people in the industry is a priceless opportunity for a foreign film maker like myself. The LATC made this opportunity real and relevant for our needs in this constantly changing world of business in Hollywood. A fantastic course!” addedAmina Jindani, from Malaysia.

Organized annually by LATC and designed for international film and television industry professionals, the LATC Global Film & TV Programoffers an intensive agenda of professional meetings, master classes, panels and events coinciding with the prestigious American Film Market. Please see below a summary of each day of the Program and a photo gallery. 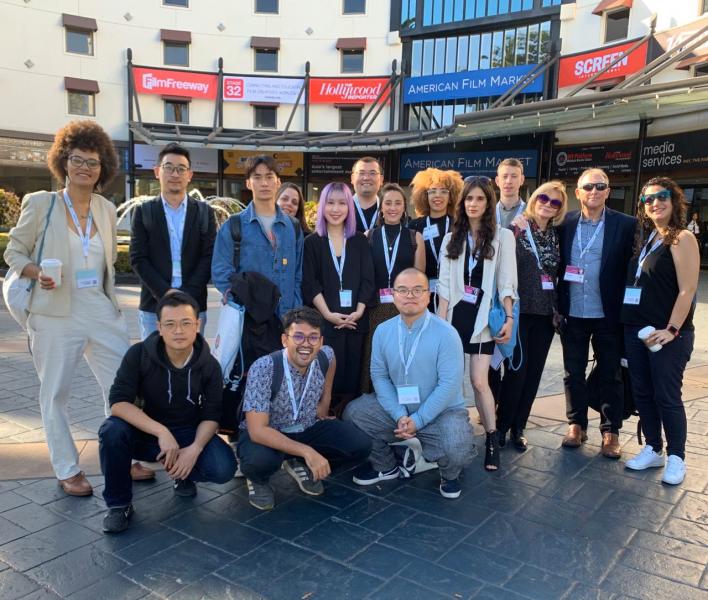 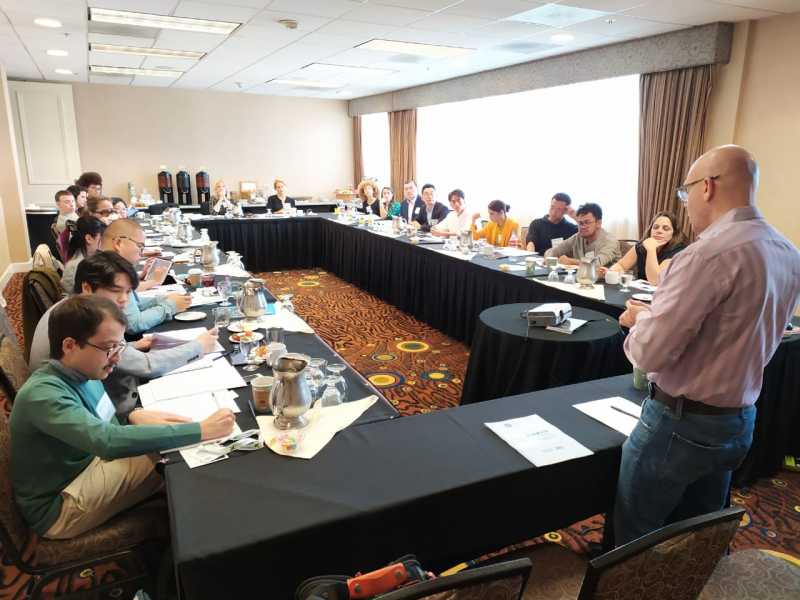 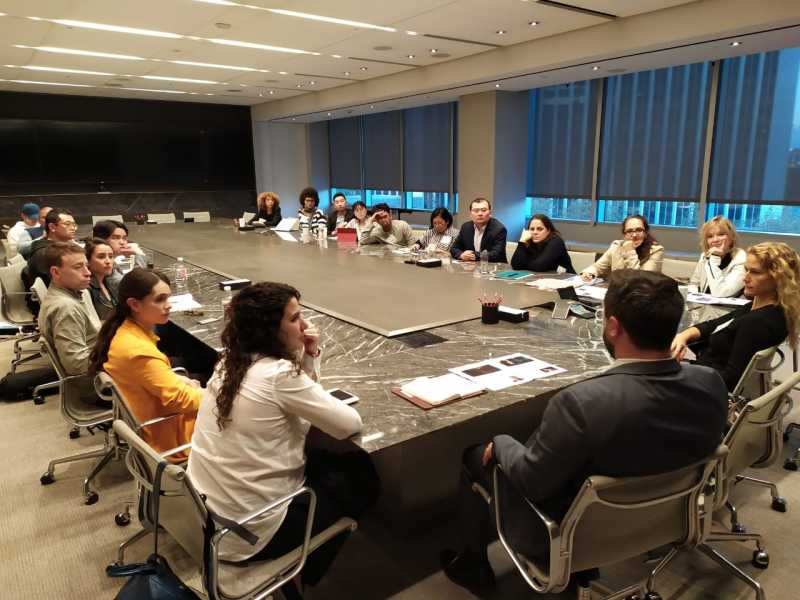 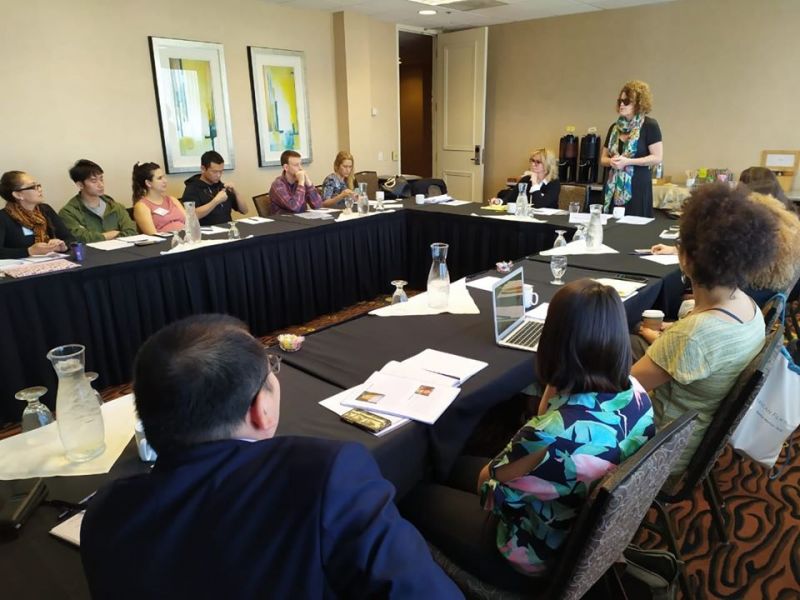 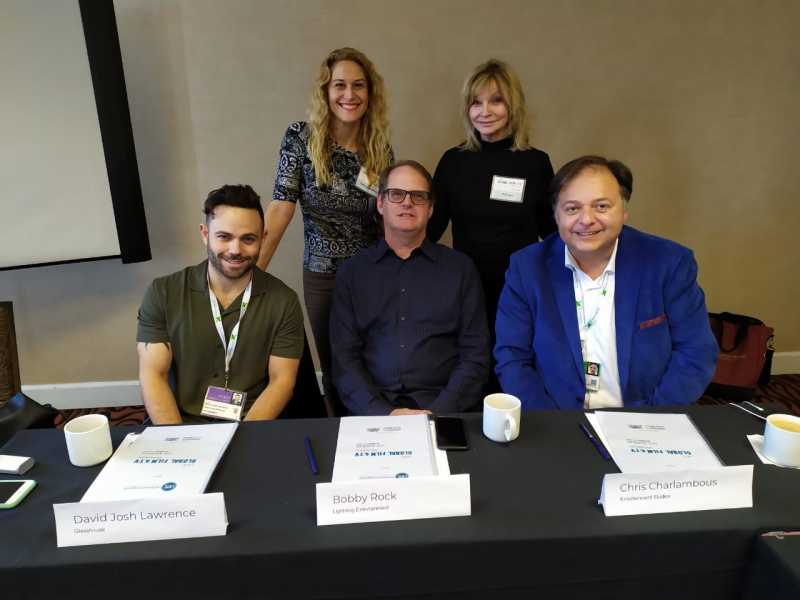 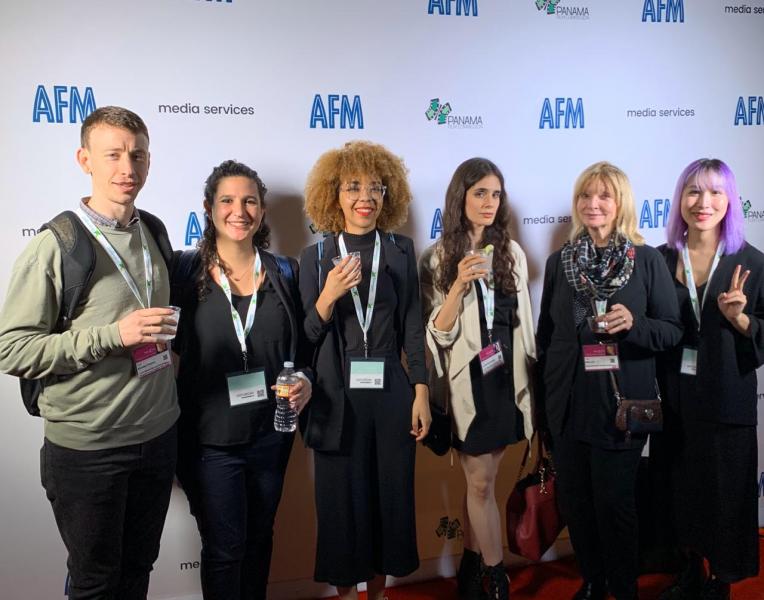 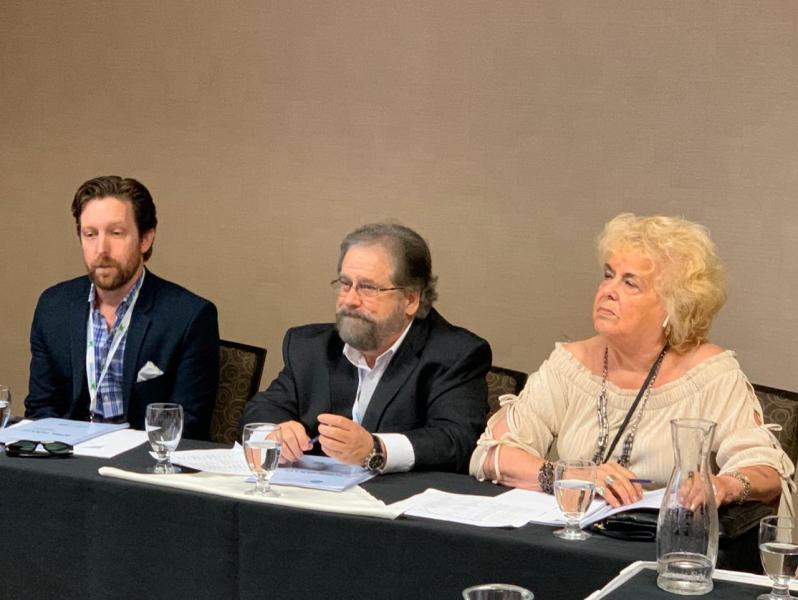 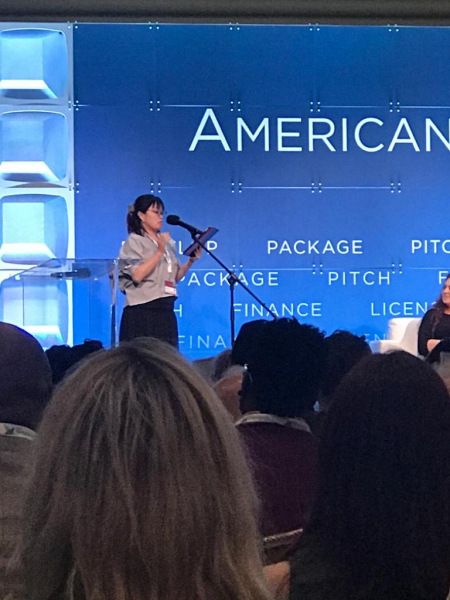 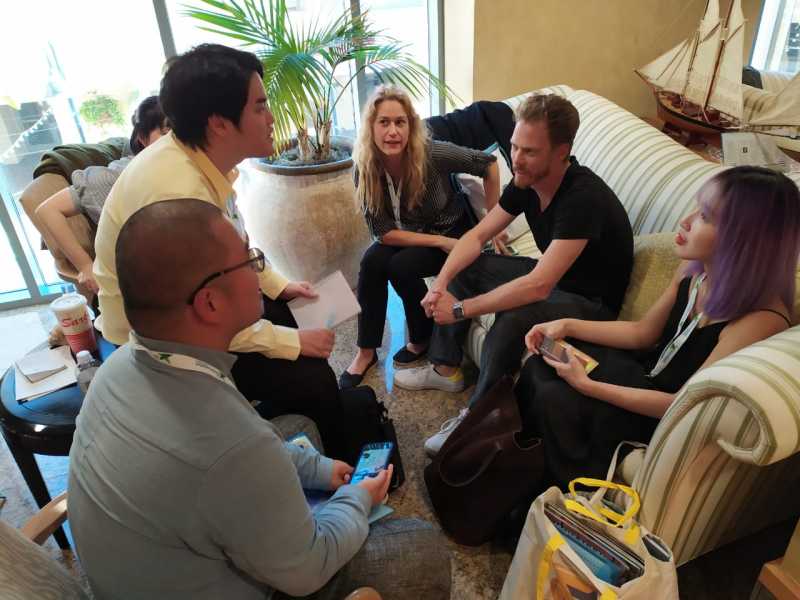 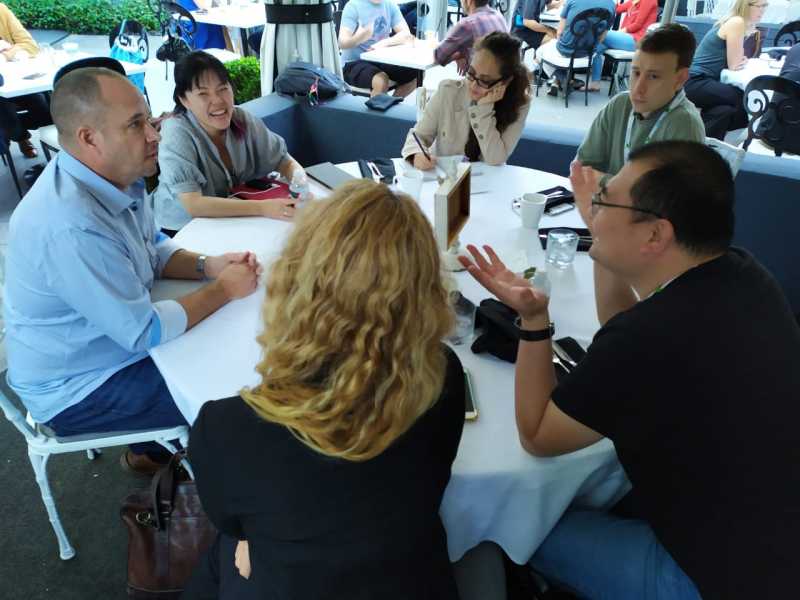 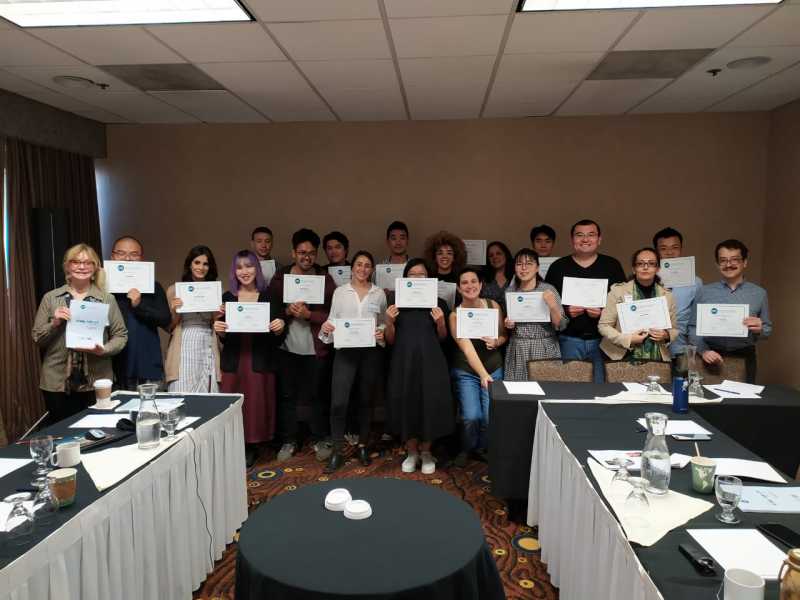 Day 1:
The program began with the traditional Orientation Session by Kate Lyra, LATC Director, and introduction of participants, followed by the Master Class “Working with major studios and streaming services” with Aaron Berger (Chatrone). In the panel “Introduction to Film financing today”, Brian Beckmann (Arclight Films), Harris Tulchin (HT & Associates) and Slava Vladimirov (Aperture Media Partners) offered different views on how to finance a film in both US and international independent film industries. In the afternoon, two attorneys from the well-known Donaldson+Callif, LLP, law firm, Katy Alimohammadi and Mandi Brooksbank presented an overview of “Key Issues in Entertainment Law” with emphasis on contracts. The next session took place at one of world’s most important talent agencies, CAA, featuring an exclusive meeting with agent Nick Lafferty. The first day closed with the LATC Industry Networking Mixer in Santa Monica at the Bodega Wine Bar attended by executives, producers and WGA members such as Frank Kusch, Meg Thomson, Clifford Werber, William Pfeiffer, Scott McCullough, among others.

The day began with the great presentation “Why is a film commission important for you?”, by Marjorie Galas, Industry Relations, AFCI-Association of Film Commissioners International, who provided an overview on how to work with Film Commissions around the world.

The intense program schedule continued with a Master Class “Working the International Film Markets & Festivals” by Bruno Chatelin, the international film festival expert and creator of FilmFestivals.com, followed by the panel: “Film Production in the Age of Streaming Services”, with Jeff Most (PGA), Katy Most (Most Media) and Will Nix (Creative Projects, Inc).  That afternoon LATC offered another great panel: “Distribution Today and Tomorrow” with Bobby Rock (Lightning Entertainment), Chris Charlambous (Entertainment Studios) and David Josh Lawrence (Glasshouse Distribution).The schedule concluded with an introduction to Netflix by Steve Solot, Latam Production Policy, and a presentation on Guilds by Jonah Cozien, Senior Counsel, Labor Relations, followed by a tour of the Netflix facilities.

This entire day was dedicated to participation in the world-famous American Film Market! Early in the morning, the group headed to the AFM Headquarters in the Loews Hotel in Santa Monica for visiting exhibitors and other activities. During the market, previously-scheduled, small-group break-out meetings for selected participants of the program were held with industry professionals, including screenwriter Daniel Berk, distributor Spencer Pollard, producers Tani Cohen and Bobby Rock, as well as director Luc Walpoth. One of the members of the LATC delegation, Noriko Yuasa, from Japan, was selected at the AFM Pitch Conference to provide a 2-minute live pitch for the entire audience. It was a thrilling experience and honor! In the afternoon, small group meetings continued with other important industry personalities, such as the award-winning writer Jim Jermanok and the director Scott McCullough. And to top off the day, the group gathered at the AFM Carousel Cocktail for industry networking and schmoozing with filmmakers from all over the world.

It was another day packed with useful meetings and activities for the LATC Global Delegation! In the morning, the group attended two Master Classes: “Directing and Independent Filmmaking Today”, by the director Thiago Dadalt, and “Writing: The Crucial Blueprint for Film and TV”, by Javier Robles, from Labo Digital.

The next activity was one of the traditional highlights of the annual program: the Pitch Panel offered participants the opportunity to pitch their projects to selected Hollywood veteran producers: Scott Martin, Michael Sifkin (both from Archstone Entertainment) and Donna White (from Unique Films), who provided on-the-spot feedback and tips on their projects and pitching techniques – a unique professional experience! That afternoon, small group meetings continued with local industry professionals, including director and writer Scott Frank. Several members of the LATC delegation attended the AFM’s Writers Workshop “You Had Me at Page One”, conducted by Pilar Alessandra (On the Page), and others visited Hollywood Boulevard, the historic Hollywood Walk of Fame, the Dolby Theater and Graumans’ Chinese Theater. Finally, the group gathered together at the second AFM Carousel Cocktail at the Santa Monica Pier for more networking and schmoozing with international filmmakers.

All good things must come to an end! On the final day of the Program, several participants attended the AFM’s Production Conference, “Producing for the International Pre-Sales Marketplace” with Miranda Bailey (Cold Iron Pictures), Sherryl Clark (The H Collective), Mark Gooder (Cornerstone Films) and Nat McCormick (The Exchange). Several members of the program continued their individual networking and business meetings at the AFM. All participants received the formal “Certificate of Participation” and the leaders of this year’s program, Kate Lyra, Vanessa McMahon and Fernanda Lima said farewell and reminded everyone that LATC will continue to support their projects and assist them as needed. They wished everyone safe travels on their way back to their home countries.