, on-line screenwriting contest. To participate, applicants must register and submit a script based on the theme “Being sustainable is …”, together with a video clip of up to 90 seconds, which should provide the concept of the film when finished. Based on this information, the general public will vote for the top 50 film concepts. During the second phase of the contest, the jury and the general public will choose the top 10 in each of two categories: short and medium-length scripts. In the final phase, the same combination of general public and jury will choose the two winners. The first prize is R$85.000 and the second prize is R$50.000. 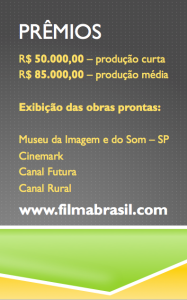