The Film Commission as an Engine for Economic Development

By Steve Solot (published in Portuguese in the “Revista do Cinema“)

The Film Commission (FC) fever continues to spread through Brazil. In 2008 there were 19 FC’s in operation, “seeking to attract international audiovisual productions and to position Brazil as a competitive location provider in the global entertainment market.” Currently, according to the Brazilian Film Commission Network (Rede Brasileira de Film Commissions-REBRAFIC), there are 25 FC’s spread across the five regions of the country, of which nine are formally established and 16 are in development.

A film commission, the internationally-accepted term for an office which provides support for audiovisual productions, offers free services, such as logistics support and facilitation of film permits for all formats of audiovisual content, and whose main objectives are providing efficient assistance for producers, and promoting the city or state as privileged destinations for on-location filming.

There are many reasons to create a film commission, including the promotion of tourism and visibility of the region, as well as political objectives. However, in Brazil, as with many countries, the principal reason which leads to the establishment of FC’s continues to be the promotion of economic development and job creation.

The economic benefits generated by FC activities are extremely attractive. In the US for example, according to data from the Motion Picture Association of America (MPAA), on-location filming of a major studio feature film generates, on average U$200,000 per day in economic activity and tax receipts.

However, it is not necessary to host a Hollywood studio film to capture economic benefits of on-location filming. The recent increase of production of all formats of audiovisual content in Brazil, and especially independent TV production, following implementation of the recent Pay TV Law No. 12.485, has brought about a “boom” in filming in various regions of the country, which has contributed to economic development and job creation.

Thus, film commissions may play an important role in the strategy of economic development in a city or state. It is no coincidence that in the US, as in many other countries, FC’s are part of economic development offices of a government entity in their respective region. In Brazil, and Latin America in general, FC’s are normally subordinated to a Secretariat of Culture, but that does not prevent their having a positive effect on the local economy.

The methodology employed to measure the economic benefits of on-location filming is known as an Economic Impact Study, and is the most important tool to determine the precise economic and employment benefits generated by filming in a given region. These studies are used to “validate” FC activities within an economic development strategy, and to demonstrate the important contribution a FC may provide to a city or state which seeks to consolidate a competitive position in the global audiovisual landscape. The conclusions the study provides may also be used to recommend public policy and creation of economic and fiscal incentives through appropriate legislation.

The Economic Impact Study is normally based on market research of direct and indirect expenditures by two groups: production companies and production service companies, as well as support service companies (security, catering, and equipment rental companies). In addition, the Study considers the number of films shot in the region, the number of days of each shooting, number of days of hotel use, local transport, general work force, hired extras, contracts for equipment rental, etc.

Appropriate coefficients or “economic multipliers” for income generation and job creation) are then applied to the data collected as a result of the research, in order to evaluate the economic impact for each format of audiovisual production: 1) fiction feature film; 2) documentary feature; 3) TV series; and 4) commercials.

The economic impact model most widely used is the RIMS (Regional Input-Output Modeling System, developed by the Bureau of Economic Analysis of the US Department of Commerce). Historically, this methodology is based on the use of a matrix of coefficients to measure successive effects, and originated with theories developed by the Russian economist Wassily Leontief in the 1930’s.

In the example in the graph below, each R$1.00 spent on goods, services, taxes, etc., generates a final total value of R$2.39 in accumulated expenditures, after deducting the partial successive loss. Thus, the multiplier is 2.39. 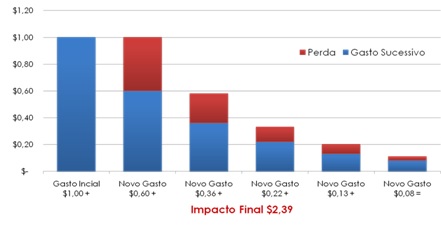 The main objectives of REBRAFIC are to ensure a high, standardized level of support for national and international producers, to promote all the regions of Brazil as privileged destinations for national and international productions, and to organize and make available information about all film commissions in Brazil. Thus, REBRAFIC will serve as the guiding force to support Brazilian film commissions and their role as an engine for economic development.