THE UPDATED SOURCEBOOK ON FUNDING SOURCES FOR LATIN AMERICAN AUDIOVISUAL CONTENT WAS LAUNCHED DURING THE GUADALAJARA INTERNATIONAL FILM FESTIVAL-FICG, IN MEXICO 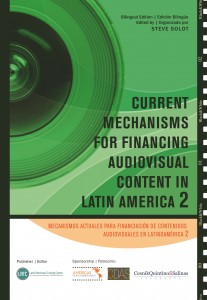 For this new updated publication, LATC has invited a select group of legal and technical experts from 13 countries to prepare a chapter on the principal mechanisms of financing audiovisual content. Also included in each chapter are references to specific legislation of each country for further research and review. Countries included in the publication are: Argentina, Bolivia, Brasil, Chile, Colombia, Cuba, Ecuador, México, Peru, Puerto Rico, the Dominican Republic, Uruguay and Venezuela.

Given the rapid development and implementation of new media technology in the audiovisual industry with its multiple formats, delivery channels and platforms, each author has included references to new media funding mechanisms, where they exist, in addition to enumerating and explaining traditional funding sources.